What are manganese steel and its history

What is manganese steel?

Manganese steel, also called Hadfield steel or mangalloy, is a steel alloy containing 12-14% manganese. Renowned for its high impact strength and resistance to abrasion in its hardened state, the steel is often described as the ultimate work hardening steel.

Manganese steel’s ability to work harden from impact loading along with its exceptional toughness make it the best wear material choice for many demanding applications. So manganese steel is widely used in industry wear parts.

Carbon Element. Carbon is one of the two most important elements in manganese steels along with manganese. Manganese steels are a supersaturated solution of carbon. For most standard manganese steel grades the carbon and manganese are in an approximate ratio of Mn/C=10. These steels, therefore, are typically 12% Mn and 1.2% C. This ratio was mainly set up by early steel-making limitations and the fixed ratio has no real significance. Increasing the carbon content raises the yield strength and lowers the ductility. See the following picture for the effects of increasing carbon content on the properties of 13% manganese steel. 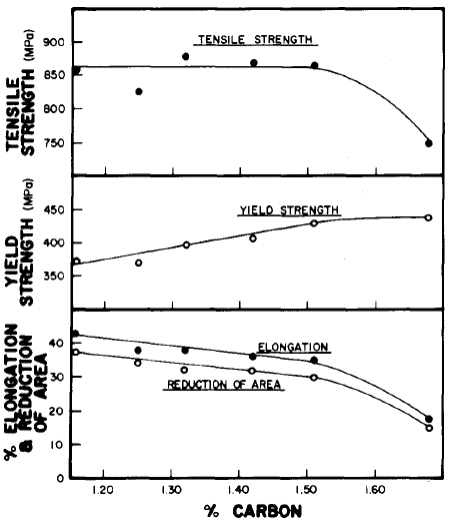 Most manganese steels are used in gouging abrasion and high impact wear situations so manufacturers try to maximize carbon contents. Practical limits do exist and as the carbon content exceeds 1.3% cracking and undissolved grain boundary carbides become more prevalent. The premium grades of manganese steels, those with high manganese contents, have pushed the upper carbon limit well beyond 1.3%.

Manganese Element. Manganese is an austenite stabilizer and makes this family of alloys possible. It decreases the austenite to ferrite transformation temperature and therefore helps to retain a fully austenitic structure at room temperature. Alloys with 13% Mn and 1.1% C have martensite start temperatures below -328°F. The lower limit for manganese content in plain austenitic manganese steel is near 10%. Increasing manganese levels tend to increase the solubility of nitrogen and hydrogen in the steel. Premium alloys with higher carbon contents and additional alloy elements exist with manganese levels from 16-25% manganese. These alloys are proprietary to their manufacturer.

Silicone Element. The specification content of silicon in high manganese steel is 0.3% ～ 0.8%. Silicon will reduce the solubility of carbon in austenite, promote carbide precipitation, and reduce the wear resistance and impact toughness of steel. Therefore, the silicon content should be controlled at the lower specification limit.

Chromium Element. Chromium is used to increase the tensile strength and flow resistance of manganese steels. Additions of up to 3.0% are often used. Chromium increases the solution-annealed hardness and decreases the toughness of the manganese steel. Chromium does not increase the maximum work-hardened hardness level or the strain hardening rate. Chromium bearing grades require higher heat treatment temperatures as chromium carbides are more difficult to dissolve into solution. In some applications, chromium can be beneficial, but in many applications, there is no benefit to adding chromium to manganese steel.

Molybdenum Element. Molybdenum additions to manganese steels result in several changes. First, the martensite starts temperature is lowered which further stabilizes the austenite and retards carbide precipitation. Next, molybdenum additions change the morphology of the carbides that form during reheating after the material has had a solution treatment. Grain boundary films of acicular carbides typically form, but after adding molybdenum the carbides that precipitate are coalesced and dispersed through the grains. The result of these changes is that the toughness of the steel is improved by the addition of molybdenum. Another benefit of molybdenum additions can be improved as-cast mechanical properties. This can be a real benefit during casting production. In higher carbon grades molybdenum will increase the tendency for incipient fusion, so care must be taken to avoid this as the resulting mechanical properties will be severely diminished.

Nickel Element. Nickel is a strong austenite stabilizer. Nickel can prevent transformations and carbide precipitation even at reduced cooling rates during quenching. This can make a nickel a useful addition in products that have heavy section sizes. Increasing nickel content is associated with increased toughness, a slight drop in tensile strength and has no effect on the yield strength. Nickel is also used in welding filler materials for manganese steels to allow the as-deposited material to be free from carbides. It is typical to have lower carbon levels in these materials along with the elevated nickel to produce the desired result.

Aluminum Element. Aluminum is used to deoxidize manganese steel, which can prevent pinhole and other gas defects. It is typical to use additions of 3lbs/ton in the ladle. Increasing aluminum contents decreases the mechanical properties of manganese steel while increasing brittleness and hot tearing. In practice, it is advisable to keep aluminum residuals fairly low for most grades of manganese steel.

Titanium Element. Titanium can be used to deoxidize the manganese steel. In addition, titanium can tie up nitrogen gas in titanium nitrides. These nitrides are stable compounds at steelmaking temperatures. Once tied up the nitrogen is no longer available to cause pin holing in the castings. Titanium can also be used to refine the grain size, but the effect is minimal in heavier sections.

Refining: in order to improve the quality of molten steel, the secondary refining process is more and more widely used. Since the 1980s, it has also been used in the production of high manganese steel. After refining, the inclusions are reduced, the distribution is improved, and the strength is increased from 657mpa to 834mpa, and the wear resistance can also be increased by 30%.

Suspension casting: pouring temperature has a great influence on the properties of high manganese steel. Manufacturers often have large furnace capacity, long pouring time, and difficult temperature control. Although various measures are taken, the disadvantages of coarse grains can not be avoided. It is studied that 2% ～ 3% (size of 0.15 ～ 0.3m) iron powder or a mixture of ferromanganese powder and iron powder is added continuously with molten steel during pouring. It acts as internal cooling iron and increases the crystallization core, improves properties of high manganese steel, and increases wear resistance by 30% ～ 50%. However, attention should be paid to decrease the fluidity of steel after adding.

Surface alloying: in order to improve wear resistance and save alloy elements, the method of adding alloy on the surface can achieve the purpose. The specific measures are to brush alloy coating on the surface of the mold, sprinkle manganese iron powder or stick alloy cast-iron sheet, melt and weld these materials after pouring molten steel, which improves the surface performance of castings. Now, the chromium-containing electrode is used for surfacing welding on high manganese steel to improve the surface performance of castings High wear resistance, high chromium powder block surfacing effect is also very good.

As cast water toughening treatment: after solidification of high manganese steel, waste heat is used for water toughening treatment above 960 ℃, which can reduce surface decarburization, shorten the production cycle, and save energy. This method can be used for small and medium-sized castings with wall thickness. Tangshan cement machinery plant used this method when casting a high manganese steel lining plate with metal mold, but the water inlet temperature must be carefully controlled.

For the condition of weak impact abrasive wear:

high manganese steel can not work hardening basically. Because of the small impact force and a low requirement on material toughness, materials with high original hardness can be selected, such as air transportation and hydraulic transmission pipeline, which can be made of basalt cast stone. For the second and third bins of cement mill, the grinding medium is small and the impact force is small, so the brittle wear-resistant materials such as low chromium cast iron, high chromium cast iron, and even white cast iron can be selected. The service life of manganese steel can be increased by 1-4 times.

Although high manganese steel can produce work hardening, its hardness is very low. Due to the low impact force, high carbon high manganese steel, medium manganese steel, bainitic steel, low alloy martensite steel, and bainite ductile iron can be selected. For example, for the lining plate (No.1 bin) of the large mill, the service life of the alloy martensitic steel zg42crmnsi2mo can be increased by 2-3 times without deformation. Especially now, the grinding medium in cement grinding gradually popularizes the use of high chromium cast ball, which does not match the hardness of high manganese steel lining plate well, which accelerates the deformation of lining plate and reduces the service life, which shows the necessity of replacing high manganese steel. When crushing the material with Proctor hardness f ≤ 12, the service life of 400 × 600 jaw crusher plate made of medium alloy martensitic steel can be increased by 20% ～ 50%, and the iron scraps in the crushed material can be sucked out to improve the purity of the material, which is beneficial to increase the whiteness of white cement and reduce the small iron oxide cave of silica brick. In addition, the small crusher hammer can be made of steel with a certain toughness of 12kg.

Manganese steel’s unique wear-resistant properties also make it very difficult to machine, at best. In the early days of manganese steel production, it was thought to be non-machineable and grinding was used to shape the parts. Now with modern cutting tools, it is possible to turn, bore, and mill manganese steels. Manganese steel
does not machine-like other steels and typically requires tools that are made with a negative rake angle. In addition, relatively low surface speeds with large depths of cut produce the best results. This arrangement produces high cutting forces and the equipment and tooling must be robust to withstand these forces. Any chatter of the tooling can add to the work hardening of the surface being machined. Most cutting is typically done without any sort of lubrication. During the machining of manganese, it is important to continuously remove the work-hardened zone with the next cut. Small finishing cuts or tool chatter will cause the hardness to build and make
the remaining surface virtually non-machineable.

Ideally, heat-treated manganese steels will have a fully homogenized fine-grained austenitic microstructure. The grain size is a function of pouring temperature and heat treatment typically does not influence the grain size. Some have tried to develop strategies of heat treatment that would first transform the structure to a pearlitic structure, which would then allow for grain refinement in the final heat treatment. These strategies have not been widely accepted or implemented for various reasons. One reason is that these cycles become expensive due to the high furnace temperatures and long hold times required. In addition, the alloy was often not significantly improved by these cycles.

Manganese steel castings require a rapid water quench following the high-temperature soak. This quench needs to occur immediately after the castings are removed from the heat treatment furnace. The rate of this quench needs to be high enough to prevent any precipitation of carbides. Figure 8 shows the microstructure of properly quenched manganese steel. A slack quench can reduce the toughness of the material dramatically. In the toughened condition manganese steel castings can be finally processed with little special care.

The one item to avoid with heat-treated manganese steel castings is reheating above 500°F. Temperatures at or above this level will cause the precipitation of acicular carbides, which can dramatically reduce the toughness. This effect is time and temperature based on longer times and higher temperatures both causing greater losses of toughness.