The cone crusher liners of the cone crusher are both important parts and major wearing parts. A pair of well-designed and well-made liners can not only ensure the production efficiency of the crusher, but also save energy, labor, and raw materials, and ensure product quality. There are many factors that affect the wear of the liner, such as material hardness, particle size, moisture, yield and feeding method, etc., but the more important are the cavity curve design and material selection factors.

Based on our customer KP100 cone crusher working conditions:

The curve of the cone crusher mantle and concave after mapping wear is shown in the following figure: 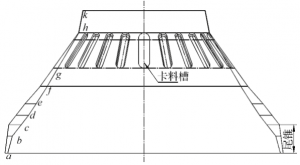 The wear amount of each section along the direction of the height of the concave and mantle are listed in the table: 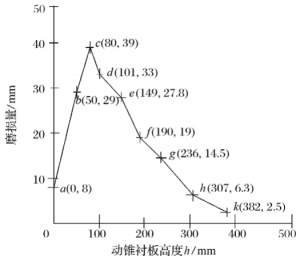 Based on the above figures, the amount of wear at different positions of the cone crusher mantle is different.

From point k to point d, there is a gradual wear section, that is, the wear amount of the cone crusher mantle curve gradually increases from point k to d at the top. Due to the point k around the upper end of this section, the cone crusher bears The huge impact load of large ore makes it have a good surface impact hardening effect (material is high manganese steel), so that the hardness of the surface of the lining board can be as high as 500 HBW, so the upper-end hardness value is the highest.
Below point k to point d, as large pieces of ore are gradually broken into medium and even small pieces, and finally broken into the required block size of the product, the impact load on the surface of the lining plate is gradually reduced, so the degree of surface impact hardening is increasing In addition, the lower volume of the cavity is smaller than the upper volume, and the same amount of material is broken, and the lower part has greater wear than the upper part. Therefore, the wear curve changes approximately linearly from point k to point d, that is, the amount of wear at point k is the smallest and point d is the largest.
From point d to point a, it is a cavity-type parallel section, and it is also a non-gradually worn section. In this section, with the gradual abrasion of the surface of the moving and fixed cone lining during the production process, the gap between the discharge openings also increases. This causes the tail cone of the moving cone to enter the cavity after the wear of the fixed cone, and finally makes the part of the tail cone and the wear curve of the fixed cone form new discharge ports and parallel regions.It is shown as the following picture: 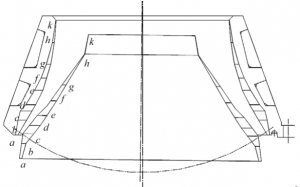 Based on the above figures, the amount of wear at different positions of the cone crusher concave also is different.

From k to h, it is the inlet section. The curve of the liner in this section is approximately vertical (the moving and fixed cone curves are approximately parallel). Therefore, during the upward adjustment of the moving cone (lifetime), the inlet size and inlet The particle size of the material is basically unchanged, the impact load is balanced, and the surface impact hardening degree is basically the same, so the wear amount in this section does not change much.
The section from point h to point c is a gradual wear section, which is roughly the same as the above analysis of the fixed cone liner from point k to point d. That is, the upper point h is subjected to a large impact load from a large ore. The highest value is from point h to point c. As the impact load gradually decreases, the degree of surface impact hardening also decreases. In addition, the cavity gap decreases from top to bottom, so the wear amount is the smallest at point h. , C point is the largest, and in this section, the wear curve shows an approximately linear trend.
The section from point c to point a (that is, the tail cone section) is a non-gradual wear section. In this section, with the gradual wear of the surface of the moving and fixed cone liners, the gap between the discharge openings also continues to increase. In order to ensure product quality, the moving cone must be adjusted in the direction so that the tail cone of the moving cone gradually enters the fixed cone. In the cavity, the worn and fixed cone curves form a new crushing cavity pattern again and again until the tail of the moving cone and the worn cone curve form a new parallel zone and discharge port size.

The real wear situation of cone crusher concave and mantle 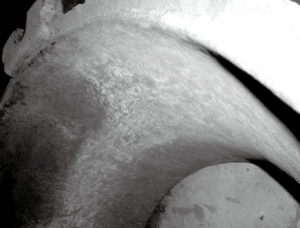 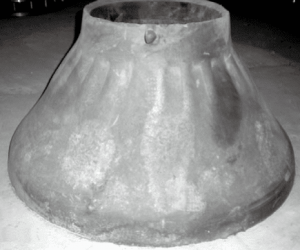 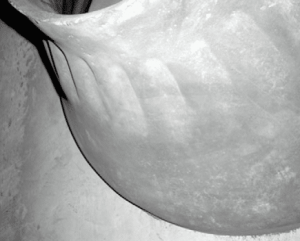 Based on the above analysis, the following design and material improvement measures can be adopted: