Maintenance for these parts must be carried out only by trained or authorized personnel, but the inspection can be performed by the operator.

The toggle plate (5006-0) is located by a toggle seat (5004-0), (5005-0) at each end. The toggle seats are hardened. But since they are exposed to high pressure and heavy wear, they are replaceable. If the toggle seats lose their shape it is necessary to replace them with new ones. 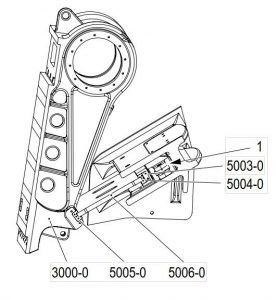 The discharge setting is the closest distance between the jaw plates at the bottom of the crushing chamber. The distance varies with the crushing movement of the moving jaw – the smallest distance along this movement is called the CSS (closed side setting). It’s unlikely that the crusher stops when this distance is as small as possible, so the CSS must be measured on a running crusher.
A gauge for CSS, consisting of a rod with discs, is supplied with the crusher. The diameter of the smallest disc, that is in contact with both the stationary and moving jaw plate when and where the distance is as small as possible, gives an appreciation of the CSS. The disc simulates the section of a spherical or ellipsoid stone.

The measuring tool is composed of a set of rubber discs with different diameters, one rod with threaded ends, nuts, fixing washer and a nylon line for gauge lifting. When the rod is suspended by the line, it will maintain the mounted disc in a horizontal position.