Crusher jaw plates are the main jaw crusher wear parts, and those are manufactured by high manganese steel.

The as-cast microstructure of high manganese steel is composed of austenite A, carbide K and eutectoid structure, usually pearlite P.
As-cast high-manganese steel, during cooling, a large amount of brittle carbides are precipitated at the grain boundaries or in the grains, so its properties become very brittle, and brittle fracture is easy to occur. It is not suitable for use, but the already precipitated by heat treatment Carbides are re-dissolved in austenite, which can make high manganese steel obtain excellent performance.
The heat treatment process parameters of high manganese steel castings are one of the main factors that determine the quality of the product. If the process parameters are not selected properly in this regard, the carbides of the casting will be poorly dissolved, the service life will be short, or defects such as crack scrap will be caused. The heat treatment process curve is shown in the figure.
It can be seen from the figure that the tooth plate is installed in a furnace below 300 ℃ and is kept at 300 ℃ for a period of time, so that the temperature of each part of the casting tends to be uniform, reduce internal stress, and prevent the casting from cracking due to excessive temperature differences between the various parts. After holding at 300 ° C, the temperature was raised to 650 ° C at a rate of 60 ° C / h.
High manganese steel usually has a eutectoid transformation temperature of 650 ° C. In order to make the internal and external temperature of the casting uniform, and further eliminate the internal stress, generally this temperature should be kept for a period of time, and then raised to 850 ℃ at a speed of 65-70 ℃.
Through heat preservation at 850 ° C, the grain boundary network K in the as-cast structure and the flake K in P can be dissolved. As the temperature increases, the dissolution rate of carbides in steel gradually increases. When the temperature is heated to 1000 ° C When dissolved, the dissolution rate increased significantly.
In general, the final heat preservation temperature of high manganese steel is set within the range of 1050-1100 ℃, and the heat preservation time depends on the wall thickness, size and complexity of the casting. The principle is that the temperature inside and outside the casting should be uniform, the carbides in the steel can be fully dissolved in the austenite, and the alloy elements can be uniformly distributed through diffusion. Excessive holding time will increase the possibility of grain growth, the surface of the casting will be severely decarburized, the casting will be exacerbated, the fuel will be wasted and the productivity will be reduced. 6H.
After the casting is taken out of the furnace, the temperature should be lower than 950 ℃ before cooling. It is required that the water temperature before quenching is less than 30 ℃, and the water temperature after quenching does not exceed 60 ℃. 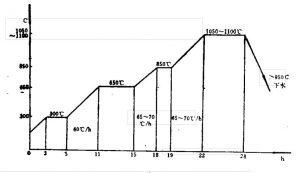